Support for the exhibition is provided by the National Council for Culture and the Arts (CONACULTA), and Fundación Televisa, Mexico, supported by the Gabriel Orozco Exhibition Supporters Group.
This retrospective of the leading Mexican artist Gabriel Orozco (born 1962) will be the largest presentation of his most critically acclaimed works in the UK. A sculptor of global significance, Orozco draws on the histories of western and Latin American art practice with limitless innovation and experimentation. Featuring over 80 works, and a new installation never previously exhibited, the survey will highlight Orozco’s substantial production of sculpture, photography, drawing and painting.
Orozco has become renowned for his boundless experimentation with found objects, both natural and man made, which he subtly and playfully alters. The exhibition will feature major early examples of this practice, including La DS 1993, a classic Citroën DS car which the artist sliced into thirds, removing the central part to exaggerate its streamlined, aerodynamic design. Black Kites1997, a human skull upon which Orozco drew a dense geometric checkerboard pattern, will be another highlight of the show. Taking a structured flat grid and superimposing it over the contours of an irregular three-dimensional surface, this work shows Orozco’s fascination with combining the systematic and the organic. Other sculptures investigate the orderly structures of game playing, as in Horses Running Endlessly 1995, a chess set consisting entirely of knights.
Orozco’s work has been particularly informed by his extensive travels and his relationship to the various places he lives, including Mexico City, Costa Rica, Brazil, New York, and Paris. The exhibition will show how these diverse sources, resulting from an itinerant life, are reflected in the past 25 years of his work. In Yielding Stone 1992, Orozco created a plasticine ball, equal to his weight, and pushed it through the streets of New York. The sculpture became slowly imprinted by the journey and gathered detritus from the city, its surface containing the memory of its movements.
Using objects found in urban settings or capturing chance encounters, Orozco manages to simultaneously encapsulate the pleasure of witnessing life and its frail significance. A range of photography will be included which captures the poetry of fleeting moments, from ripples in a puddle to the condensation of breath on a piano.
Gabriel Orozco at Tate Modern is curated by Jessica Morgan, Curator, Tate Modern assisted by Iria Candela, Assistant Curator, Tate Modern. It was organized by Ann Temkin, The Marie-Josée and Henry Kravis Chief Curator of Painting and Sculpture, with Paulina Pobocha, Curatorial Assistant, Painting and Sculpture, at The Museum of Modern Art, New York. The exhibition travelled to the Kunstmuseum Basel and will be on display at the Centre Pompidou, Paris from 15 September 2010 – 3 January 2011. The exhibition is accompanied by a fully illustrated catalogue as well as a new book as part of the Modern Artist series, by Jessica Morgan. 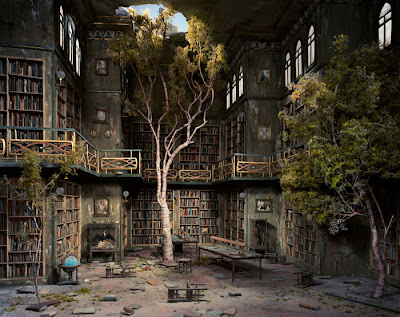 "In my newest body of work The City I have imagined a city of our future, where something either natural or as the result of mankind, has emptied the city of it's human inhabitants. Art museums, Broadway theaters, laundromats and bars no longer function. The walls are deteriorating, the ceilings are falling in, the structures barely stand, yet Mother Nature is slowly taking them over. These spaces are filled with flora, fauna and insects, reclaiming what was theirs before man's encroachment. I am afraid of what the future holds if we do not change our ways regarding the climate, but at the same time I am fascinated by what a changing world can bring." 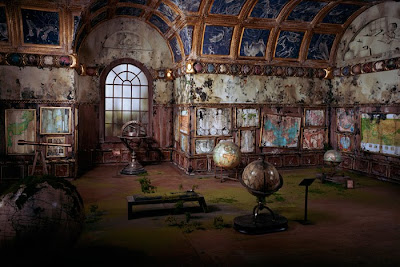 It's been a long time since I mentioned Accidentally Kansas by Lori Nix - what I did not mention were all the other amazing diomaras she keeps creating year after year. 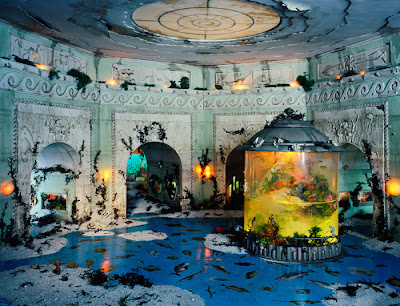 All images taken from The City © Lori Nix

LUCAS FOGLIA - ON MY MIND 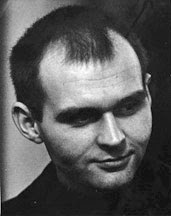 On a constant learning curve, as indicated by my blog's title, I frequently come across an artist unfamiliar to me, then attempt to learn something. One such artist: Carl Andre. After some research I discovered that he's an interesting subject astrologically, so...

To demonstrate that he clearly represents a Virgo-type artist, I've used the words of other writers, who have no interest in astrology, but demonstrate an astrological point.

Carl Andre has natal Sun (self) Neptune (creativity) and Venus (art) all in Virgo - a good candidate for the label "Virgo-type". 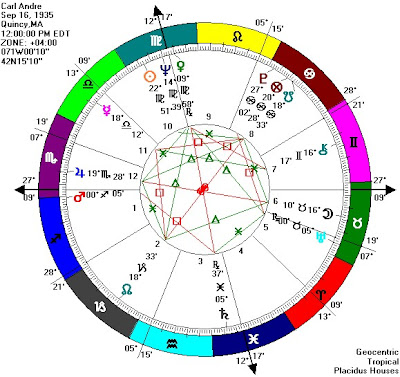 Bolding, in each quotation is my own, to indicate typically Virgoan traits.

Carl Andre was one of the founders of the art movement known as Minimal, Systemic, or ABC Art. It is an art that seeks to eliminate everything decorative, extraneous and additive, reducing all components to art's purest elements; it is precise, cerebral and austererather than accessible. Andre once said that what was beautiful in art was "not that someone is original but that he can find a way of creating in the world the instance of his temperament." His own temperament is close to the tranquil philosophy of Taoism, and many critics refer to his work as "pacific." Link.


In 1965, Andre began working for a railway company. This blue collar working experience had a large impact on his sculptures, especially in terms of subject and medium. Andre interworked his experiences with hard labor and man-made simple structures into his art. ‘The railway completely tore me away from the pretensions of art, even my own, and I was back on the horizontal lines of steel and rust and great masses of coal and material, timber, with all kinds of hides and glue and the burdens and weights of the cars themselves’ Link.

Virgo, ruled by Mercury, has close links to communication of all types - including words.


Poetics play an important role in Andre’s work, manifested most literally by his experiments with linguistic equivalents to his sculpture. Since the 1960s he has created poems and, in the tradition of concrete poetry, situated the words on the page as if they were working drawings.......Andre’s consistent search for the simplest, most rational models embodies a moral philosophy as well as an artistic practice. (Cornelia Lauf)


Andre was married to the Performance Artist Ana Mendieta until her death in 1985. Her death, from falling from an open window, was judged suicide, after Carl Andre was tried, and acquitted, for her murder. (More HERE.)

Some examples of his work. 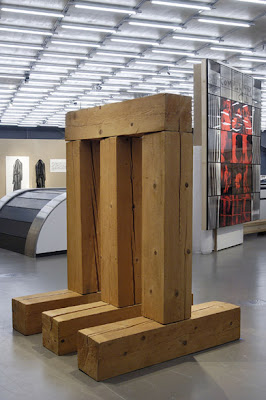 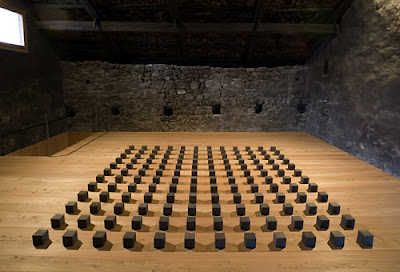 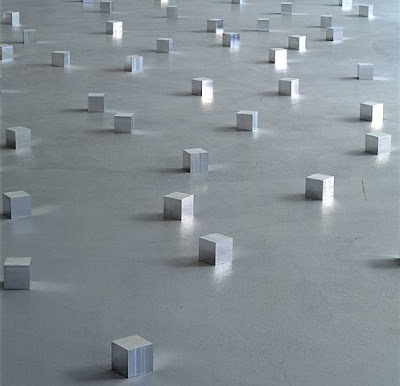 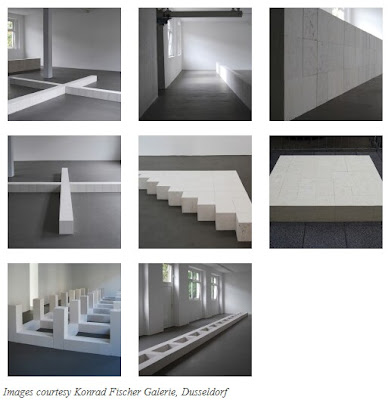 TRABUM (part of the Element Series) Title is derived from the Latin for log or timber. 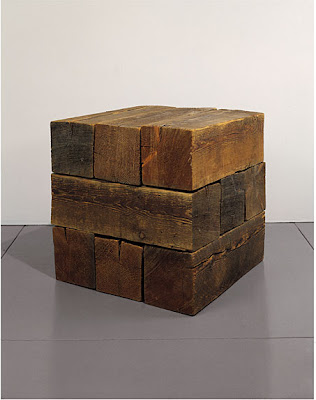 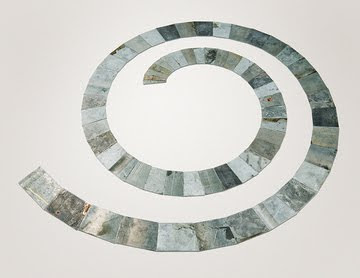 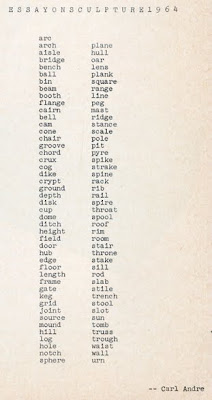 From MAP OF POETRY at Autobiography POSTSCRIPT
Further to Gian Paul's comment (below), here's a chart showing Carl Andre's natal in the centre and a chart showing where the planets were the time of death of his wife in the outer circle. As I don't have a time of birth for Andre, anything connected to his Moon isn't relevant here, indication of ascendant and mid-heaven will also not be accurate. I found time of 4am for the wife's death somewhere on the net and have used it for the death chart.

Most significant, as I see it, is Sun over Andre's natal Neptune (Neptune = illusion/delusion). That swings both ways, so not decisive. Any ideas? 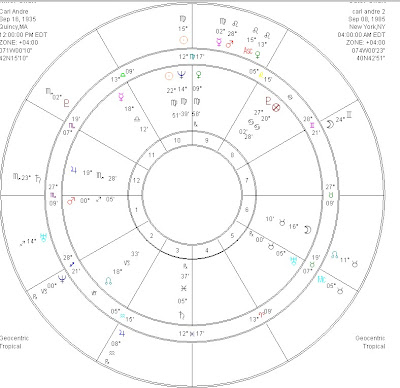