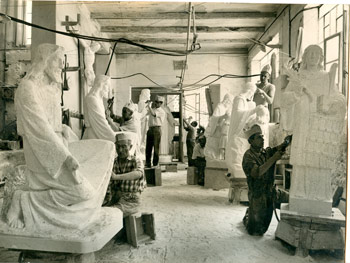 Fabio Cavallucci appointed as artistic director of the XIV International Sculpture Biennale of Carrara Fabio Cavallucci has been appointed as artistic director of the XIV International Sculpture Biennale of Carrara, which will take place from June 26th to October 31st 2010. Carrara, whose quarries produce the precious marble that has been used over the centuries by artists such as Michelangelo, Bernini, Canova and Moore, will once again be the meeting place for international artists. The fourteenth edition aims to position the Biennale among the leading contemporary art events in Europe. Some of the most internationally acclaimed artists together with a large number of emerging artists will be invited to create specific works. Over the years, the Carrara Biennale, which began in 1957, has hosted artists of international fame as Henry Moore, Robert Morris, Luigi Mainolfi, Jannis Kounellis, Richard Long, Michelangelo Pistoletto, Giulio Paolini, Louise Bourgeois, Mario Merz, Stephan Balkenhol, Antony Gormley, Marc Quinn, as well as some of the most significant Italian curators such as Luca Massimo Barbero, Bruno Corà, Enrico Crispolti and Francesco Poli. Fabio Cavallucci, curator and art critic, was director of the Galleria Civica di Arte Contemporanea of Trento from 2001 to 2008 and coordinator of Manifesta 7 in Trentino Alto Adige. He is currently a member of the board of the International Foundation Manifesta. He has curated exhibitions and special projects of important artists such as Mario Merz, Joseph Kosuth, Cai Guo-Qiang, Maurizio Cattelan, Katarzyna Kozyra, Paul McCarthy, Santiago Sierra, Aernout Mik, Gillian Wearing, Wilhelm Sasnal. From 2002 to 2008 he was editorial director of the magazine “Work. Art in progress”. He is contributor to “Flash Art” and “Flash Art International”. The International Sculpture Biennale of Carrara is instituted by the Council of Carrara, the Fondazione Cassa di Risparmio of Carrara and the Cassa di Risparmio of Carrara; it is supported by Regione Toscana and Provincia di Massa Carrara, and is organized thanks to the collaboration with the Fine Arts Academy of Carrara, the Agency for Tourism Promotion of Massa Carrara and the Internazionale Marmi e Macchine Carrara Spa. Info: XIV International Sculpture Biennale of Carrara c/o Teatro Animosi – Piazza Cesare Battisti – 54033 Carrara, Italy T/F: +39 0585 641477 E: biennaledicarrara.office@gmail.com W: http://www.labiennaledicarrara.it