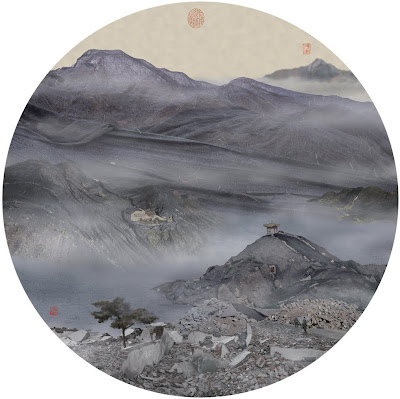 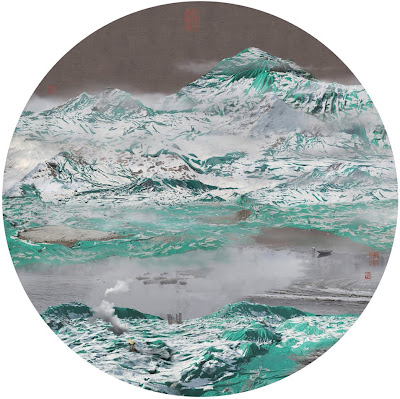 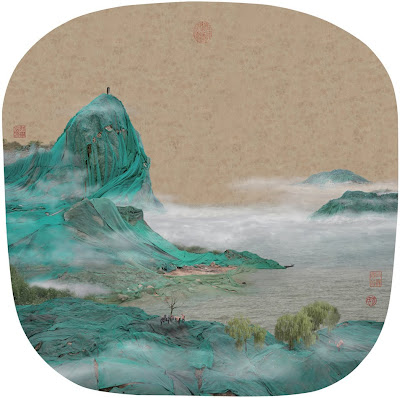 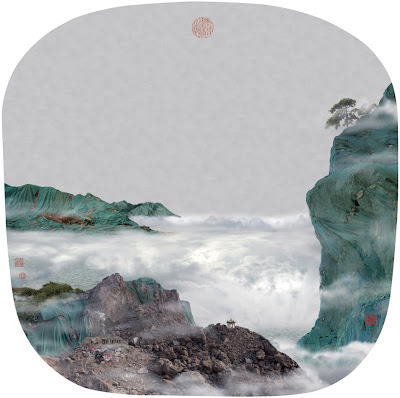 Yao Lu
Work from New Landscapes.
"Rarely exhibited in the West, Chinese artist Yao Lu (b. 1967) documents his changing country in atmospheric works that look to the future through the lens of the past. In his first show in the U.S., Yao presented 16 photographs, most circular or rounded windowlike compositions floating on a white ground, 47¼ inches square, with two horizontals measuring 6 and 10 feet across. The neutral backgrounds and compressed spaces suggest traditional Chinese landscape paintings; the works even bear the red signature stamps and collection seals known as chop marks. But these mist-shrouded scenes (ranging from 2006 to ’08) are digitally composed montages of photographs taken by Yao of China’s ubiquitous construction sites and trash heaps.
In these cleverly disguised scenes, Yao subtly critiques China’s willingness to sacrifice its history and despoil the environment in its breathtaking sprint to modernization. Deceptively pastoral scenes of rivers, lakes and mountains blanketed with flora or dusted with snow are, upon closer inspection, ravaged landscapes awaiting development. Lush-seeming hillsides are actually green mesh-covered mountains of debris. A flowing river is revealed to be a road wending around mounds of rubbish, and rocky outcrops are broken chunks of concrete. Some scenes are nonspecific, while the titles of others provide locales—fishing boats near Mount Yu, a house on Mount Fuchun, a spring picnic beside Lake Dongting—all soon to be lost, presumably, to sprawling construction. The lone tree, pagoda or house illustrates not an ideal but the lone holdout still standing in the revision of a national narrative.

Yao’s work is akin to that of Masami Teraoka, Yun-Fei Ji, Shahzia Sikander or any number of artists who recycle traditional art forms to suit contemporary themes. With tiny human figures visible in some works, Yao’s pictures also touch on the tradition of the sublime, here with humanity overwhelmed not by nature but by the forces of commerce and “progress.” While many of his compatriots found expression in physical feats or Western modes of representation, Yao’s message seems more poignant and mournful than defiant. His transformation of environmental depredation into nostalgic renderings of natural beauty raises the question of whether the new China, like Yao’s fabricated scenes, is built on falsehood." - Stephanie Cash for Art in America.