"My line is childlike but not childish. It is very difficult to fake... to get that quality you need to project yourself into the child's line. It has to be felt." 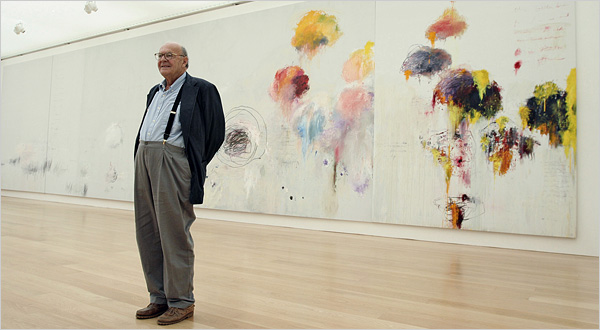 Cy Twombly with his painting "1994 Untitled (Say Goodbye Catullus, to the Shores of Asia Minor)," at the Menil Collection in Houston in 2005.       Michael Stravato for The New York Times


The raw, calligraphic art of Cy Twombly, the US abstract expressionist titan who died yesterday in Rome aged 83, brings about the most impassioned of reactions.
On the artist's "Lepanto" show at Gagosian Gallery in New York early 2002, for instance, The Art Newspaper gushed: "The operatic melodrama and pseudo-historical pomposity of old Cy Twombly may induce the occasional comic twitch of the lips but the sheer chutzpah of his painterly chops still awes."
Artist Dexter Dalwood, meanwhile, opines: "I think he was able to acknowledge the decades without losing his subject matter. 'The Treatise of the Veil' series from the late 1960s is such a shift from the early work and totally embraces minimalism, while the 1980s work is so expressionistic and stylish. The recent work also has the 'heft' of' late work' yet it all maintains a rigour and passion."
In an interview with our sister paper, Il Giornale dell'Arte, Twombly's niece, Marion Franchetti, remembers that the artist "shared the elegance and good taste" of his patron and later brother-in-law, Baron Giorgio Franchetti. "My father admired Uncle Cy for just that reason: the sophistication of his style and the breadth of his culture."
A major show of Twombly's work is currently at the Dulwich Picture Gallery in London ("Twombly and Poussin; Arcadian Painters", until 25 September). Ian Dejardin, the Sackler Director of the Dulwich Picture Gallery, comments: "We hope [Twombly] would have enjoyed seeing his deeply personal paintings, drawings and sculpture in such profound dialogue with the work of Nicolas Poussin, the artist of whom he said: 'I would have liked to have been Poussin, if I’d had a choice, in another time'."
Famous for his gestural paintings and drawings, the Virginia-born Twombly also produced a large body of sculptures.
He is survived by his son, Cyrus Alessandro (with his late wife the Italian painter Tatiana Franchetti), two grandchildren, and by his longtime companion, the writer Nicola Del Roscio.
A memorial to the artist will run in our September print edition

By The Art Newspaper