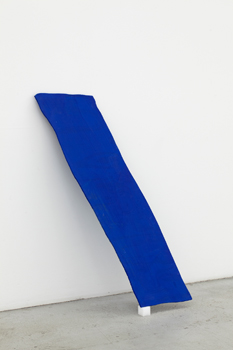 Share on google_plusone Share on emailShare
Bergen Kunsthall is proud to present the American artist Richard Tuttle’s first solo exhibition in Norway. The exhibition will be held in the Art Museums of Bergen’s department Lysverket.
In the mid-1960s Richard Tuttle established a unique position for himself in the American post-war art scene. Since then he has presented a large number of exhibitions at regular intervals, and his oeuvre has been the object of constantly renewed interest. Tuttle is often described as a post-minimalist, with a background in the artistic milieu in which he first became known; nevertheless Tuttle’s works elude simple characterizations. It is striking to see how his whole oeuvre appears as relevant today as ever in the light of the renewed current interest in formal issues and an orientation towards the meaning-bearing features of materiality in sculpture and painting.
In Tuttle’s exhibition, Bergen Kunsthall acts as a guest, or perhaps an infiltrator, in the art collection of the neighbouring institution the Art Museums of Bergen. In the form of several small ‘exhibitions within the exhibition,’ a series of new works by Richard Tuttle will be presented, spread over three halls on the second floor of Lysverket. This building houses the largest overview presentation of the museum’s collections, from pre-modern art to international modernism.
The exhibition takes an active approach to the special architecture of the museum. The collection is presented here along encircling ‘corridors’ with a succession of adjacent smaller exhibition spaces and ‘exhibition cabinets.’ The viewer moves from room to room, and thus experiences the narrative of art history as a sequence which forms a totality, and at the same time as a succession of separate individual presentations or small-scale exhibitions. This situation is exploited in the exhibition project by presenting Richard Tuttle’s solo exhibition in three parts, each of which functions relatively separately within its own spatial boundaries, but can also be viewed in relation to the surrounding art.
In this project Bergen Kunsthall has chosen not to place Richard Tuttle’s work in the section where he perhaps most naturally ‘belongs’ in the art-historical narrative (for example as part of Late Modernism). Instead Tuttle’s exhibition will be on the floor where the museum shows works of pre-modern religious art, moving through European masters of the seventeenth century to Norwegian nineteenth-century painting. In this way Richard Tuttle’s exhibition will consist of small ruptures in the overall narrative framework that the Art Museums of Bergen presents to its visitors.
Richard Tuttle was born in Rahway, New Jersey in 1941. He lives and works in New Mexico and New York.
The exhibition is produced by Bergen Kunsthall. Presented in collaboration with the Art Museums of Bergen.
Platform: Richard Tuttle and Barbara Dawson3 November, 3:30pm
Venue: Bergen Public Library auditorium
Richard Tuttle in conversation with Barbara Dawson
Barbara Dawson is director of Dublin City Gallery The Hugh Lane. She is the author and editor of several books and texts on modern and contemporary art including Turner’s Watercolours at the National Gallery of Ireland; Hugh Lane: Founder of a Gallery of Modern Art for Ireland; Francis Bacon’s Studio; Trace Elements: Francis Bacon Palazzo Reale; Barry Flanagan; Hidden Islands: Brian Maguire and The Spade and The Soufflé Richard Tuttle. She has curated several exhibitions including Barry Flanagan on O’Connell Street (2007); Julian Opie Walking on O’Connell Street (2008); Hugh Lane 100 Years (2008), Francis Bacon – A Terrible Beauty (with Martin Harrison) (2009), Richard Tuttle Triumphs (with Michael Dempsey) (2010) and Civil Rights Etc by Rita Donagh and the late Richard Hamilton (2011) and Francis Bacon e la condizione existenziale nell’arte contemporanea (with Franziska Nori) CCC Strozzina 2012. She secured the donation of Francis Bacon’s studio and contents for Dublin in 1998 from the artist’s heir John Edwards supported by the executor of the Estate Brian Clarke. The relocated studio opened to the public in 2001.
Platform is Bergen Kunsthall’s series of lectures, presentations and debates. This autumn’s series will take place at the Bergen Public Library during the period when Bergen Kunsthall’s own building is being refurbished.
Read more at www.kunsthall.no.