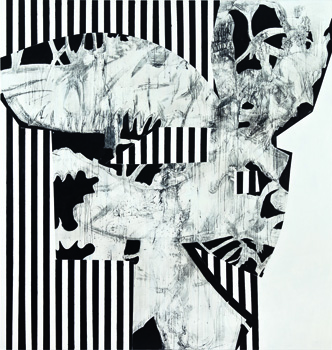 The Bonner Kunstverein is pleased to announce its coming exhibition on Charline von Heyl (b. 1960, lives and works in New York and Marfa, Texas), a significant artist in the field of contemporary painting. Her works highlights painting’s ongoing currency and—in their unusual combination of charcoal, pastel, acrylic or oil paint—conjure a paradoxical pictorial world. Lozenges, zigzagging lines and circles meet up with amorphous forms, gestural sections as well as with liberally applied lines that suggest silhouettes; powerful colors or reduced black-and-whites constitute some of the elements of a highly personal pictorial realm. Although von Heyl was part of the Rheinland’s art scene at the beginning of the 1990s, her work has never been presented thoroughly in this region. The Bonner Kunstverein is thus proud to announce Charline von Heyl’s first institutional solo exhibition in the Rhineland. The selection of works, assembled in collaboration with Kunsthalle Nuremberg, gathers pieces from the U.S. and various European countries and draws attention to the artist’s more recent works, especially to the strong links between her painting and her graphic production.
After growing up in Bonn, von Heyl studied at first in Hamburg before she transferred to the Düsseldorf Art Academy. Although her move to New York in 1994 greatly widened her approach to painting, she still took with her significant impulses from the Rhineland art scene around Martin Kippenberg: “I began as a painter in an environment in which painting was cool and also aggressive, and I never actually lost my belief in the radical potential of painting.” She subsequently developed her own vocabulary and free associations with a variety of elements from art history, newspapers, comics, Internet, African Shoowa design or vase painting patterns from ancient Greece. These diversified source materials form a kind of archive that indirectly pervades her practice. Intuitively and without any preliminary sketching, the artist consciously keeps the painterly process open and takes the works to a point where, despite their inner diversity, they gain an iconic vividness. Neither narrativity, beauty or even pleasingness are the criteria here, rather the repeated discarding and sabotage of the images. Thus, the works can be described as idiosyncratic and autonomous characters that lure us to a close-up view, allow insights, yet simultaneously keep their distance.
The selection of recent pieces in the show points out the recurring use of graphic elements such as stripes and zigzagging lines, which play a special role in the artist’s practice. Charline von Heyl uses them to structure and dynamize the medium in a self-reflective manner—for example on the painted-in interior frames. Painted segments seem almost applied with a printing block, dots or harlequin-like rhombus patterns seemingly stamped, and individual color fields that reveal no trace of a brushstroke and seem to be generated by a printing machine. In the collages and works on paper, which are produced parallel to the large-scale canvases, von Heyl has used a variety of techniques. The presence of acrylic or spray paint, copies, lithography, silkscreen as well as charcoal on polyester foil and paper testify to this. Her experimental way of working with diverse printing methods generates experiences that, in return, influence the painting process. The specific architecture of Bonner Kunstverein’s exhibition hall allows the viewer to perceive an intense dialogue between these two fields. Besides her paintings, Charline von Heyl shows in the central cabinet a series of twelve new works on paper as well as the artist’s book Sabotage from 2008, whose pictures are formed and transformed when turning its transparent and opaque pages.
With a pictorial vocabulary that takes up a contemporary look at the history of painting and originates beyond any regard for concepts such as abstraction or figuration, the artist has acquired an international reputation. She has had many solo exhibitions, among others at the Vienna Secession (2004), the Institute of Contemporary Art, Philadelphia (2011) or Tate Liverpool (2012). With Charline von Heyl’s presentation, Bonner Kunstverein builds on the exhibition practice from the past decades that has repeatedly taken up renowned and influential positions like Christopher Williams and Matthias Poledna in 2009, Leiko Ikemura in 2006, Bas Jan Ader in 2000 or Alighiero Boetti in 1992.
The exhibition is supported by