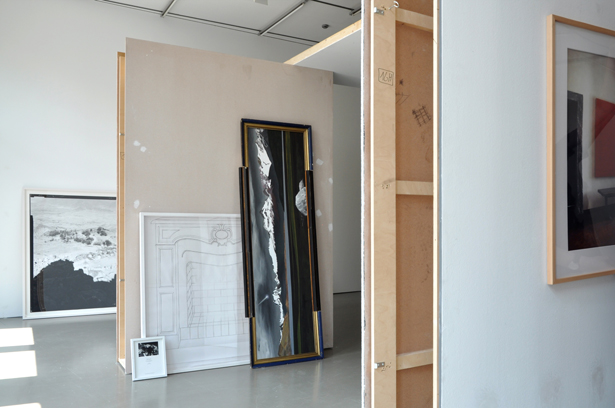 CMRK is a network of four independent institutions for contemporary art based in Graz: Camera Austria, Kunstverein Medienturm, < rotor >, and Grazer Kunstverein.
DLF 1874 – The Biography of Images
Camera Austria
30 June–2 September 2012
www.camera-austria.at
Susi Jirkuff
Rainy Days
Kunstverein Medienturm
30 June–18 August 2012
www.medienturm.at
Maribor Graz
Lesson 1: A temporary, improvised context of communication
< rotor >
30 June–21 July and 20 August–8 September 2012
www.rotor.mur.at
Gitte Villesen
I had no other choice than to jump from one pile
to the other, as there was nothing in between
Grazer Kunstverein
30 June–25 August 2012
www.grazerkunstverein.org

Share on google_plusone Share on emailShare
When an artwork joins a collection, it leaves the story of its creation behind. It disengages from reflections and decisions that had hitherto bound the work to its author. Factual information assumes the position of the original context: year, technique, dimensions, edition, inventory number: “DLF 1874“. As part of a collection (in this case, a public photography collection) it is subjected to a different logic of classification, systemisation, and historicisation. The work’s actual inceptive history is masked and remains the knowledge of the author: Which decisions led to the realization of a work of art? What was tossed aside? Who was involved? What other works were created in connection with this one? Which trips were taken?
In the framework of an exhibition the connection between the work and its author is re-established, enriched with contexts and references—the reconstruction of a “biography of images” of sorts ensues. In the exhibition, all of these biographies meet under specific conditions, contradicting or validating one another, intersecting with various regimes of meaning production—an inventory of ideas, projects, politics of representation, an inventory where the stories of their geneses may once again be told and put up for negotiation.
In the exhibition Rainy Days, Susi Jirkuff presents an intimate parallel universe beyond the media hype. Over a two-year process, Jirkuff filtered the flood of information and images she encountered in newspapers, on television, and on the Internet so as to utilise her impressions for her own purposes. Jirkuff forces a “hole” into the reality transported by the media, thus making visible an unseen, assumedly non-present everyday world. In the process, Jirkuff subverts the mechanisms of the mass media by translating its images with drawings into personal moments.
In three apartment-like cinematic settings, the protagonists—Mr. A., an artist in a rather bad mood, his neighbour The Bitch, and the curator Mr. C.—are declaring their sentimental microcosmos to be a general sentiment within society. Touring through the exhibition, a parallel narration develops between the figures—at times seeming to reflect a parable of the art scene—who ultimately fail to transcend their own private world in their dialogue. Rain patters onto the windows and evokes a sentimental feeling, a blues that Susi Jirkuff makes resonate in her image-world.
Maribor Graz presents an experimental setup in two European Capitals of Culture: Graz and Maribor. Each is the second-largest city in its respective country. And: to date, neither city offers training for visual artists on an academic level. Reflection on alternative knowledge and know-how transfer is also of sustained interest for art education and training.
An open, transnational process has been initiated wherein collaborative action leads to the activation of artistic and critical forces. The project thematises the social environment where knowledge transfer takes place, life in public space, and the city as an open page for artistic agency.
Gitte Villesen‘s documentary videos and installations can be perceived as portraits in the broadest sense: they explore the form in which individuals or social groups give shape to their lives within the framework of their cultural possibilities. Villesen illuminates how subjectivities are constituted in the everyday micro-politics of gestures, habits, and rituals that are in constant tension between norm and deviation. At the same time, she carefully avoids social generalisations by situating the practice of documentation itself as exchange and encounter—as a specific form of social interaction in which the forms of representation always become the subject of negotiation as well. Together with a new video piece co-produced by Grazer Kunstverein and the National Museum of Denmark in Copenhagen, Gitte Villesen’s exhibition will focus on her most recent works, for which she has travelled to Gambia several times since 2008. On the whole, Villesen follows an ethics of documentation, which can be succinctly expressed through the words of writer Ursula LeGuin: “The story is not all mine, nor told by me alone.”