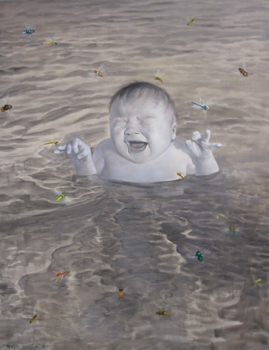 Fang Lijun
The Precipice over the Clouds

Curated by Danilo Eccher
The GAM – Galleria Civica d’Arte Moderna e Contemporanea di Torino opens its summer programme offering its exhibition space for the first great solo exhibition in Italy of Chinese artist Fang Lijun (b. 1963; Handan, China; lives and works in Beijing).
An acclaimed artist in his country, Fang Lijun was one of the main exponents of Cynical Realism, a movement which developed in China in the 1990s focusing on the analysis of Chinese socio-political history in the 20th century, with a particular reference to the Cultural Revolution, up to the current economic boom, dealt with sharp and uncanny humour and irony.
GAM presents a momentous exhibition, bringing forth the artist’s rich and inventive figuration, with a selection of around 30 monumental works which belong to his recent production, from 2006 to today, showcasing some works never shown before or carried out especially for this exhibition.
Displayed in the museum’s two exhibition venues, the Exhibition area on the first floor, and the GAM Underground project on the underground floor, this exhibition welcomes the visitor with a powerful visual impact, and succeeds in recreating the imaginary worlds of an artist who has devoted his life searching for the union of Mankind with nature. The immense, whirling skies studded with insects and birds, mice, butterflies, often peopled with human faces, both joyful and desperate, are the first subjects the public will be confronted with. The paintings are magnificent, displayed according to impressions without following a chronological order, even if the peculiarity with Fang’s works is that they do not have a title despite not being Untitled, instead his production is marked by the date (sometimes only the year, or the year, month, and day). Hence, for instance, in 2005-2007 clouds open up forming a whirlwind vortex, swallowing up sleeping children who lean on faint seagulls created by the very clouds.
In the large 17-metre-long painting bearing the same 2005-2007 title the vortex is made of birds and billions of insects which tend to reach an undefined point on the horizon. Once more a child is the protagonist of 2007.4.6, a work chosen to be the guiding image of the show. A newborn plunged into dark water is desperately crying and is surrounded by colourful dragonflies, small but annoying creatures which may represent future trouble in the existence.
If on the first floor the skies and Mankind are predominant, the central room of the exhibition area introduces the theme which will then be analysed in the Underground Project, i.e. the intertwining between life and death.
Death is indeed the main subject of some of Fang Lijun’s works, metaphorically represented as mice and bats (Untitled 2011) or maggots (2006.7.1), or confirmed by the presence of lifeless bodies, corpses of famous people, protagonists of the Chinese Cultural Revolution or of Tian’anmen Square repression. In 2010, a large painting displayed on the first floor almost 9 metres wide, one recognises among the dead Lenin’s face and the victims of 1871 Paris Bloody Week. However, these works maintain a glimmer of life, represented by the sun rising, by shiny jewels, or children and people celebrating.
The exhibition also features some new works finished in the weeks preceding the opening, such as2011-2012, a city of sky-scrapers enveloped in a dark fog, with one glimmer of dim light allowing to see the usual myriads of colourful butterflies together with dark mice and bats.

This exhibition is curated by Danilo Eccher, Director of GAM, and it is carried out in a successful cooperation with major Chinese institutions, such as the NAMOC (National Art Museum in Beijing) and the Misheng Art Museum in Shanghai.
Fang Lijun has displayed at over 100 exhibitions, including several solo shows at international museums like The Japan Foundation in Tokyo, The Staatliche Museum in Berlin, The Taipei Fine Arts Museum in Taiwan. In addition to collective exhibitions at institutions like the New York MoMA, the SFMoMA in San Francisco, the IMMA in Dublin, and the Centre Pompidou in Paris, he also exhibited at two editions of Venice Biennale, in 1993 and 1990.
His works are displayed in important international private and museum collections, including, for instance, the Ludwig Museum in Cologne—one of the first European institutions, together with the Stedelijk Museum in Amsterdam, to buy his works—the Saatchi Gallery in London, the MoMA in New York, and many other museums and institutions in China.
The catalogue published by Charta gathers texts by European and Chinese critics. A rich colour section, around 200 pages, is devoted to Fang Lijun’s entire artistic production, from the early works to the new ones displayed at GAM.