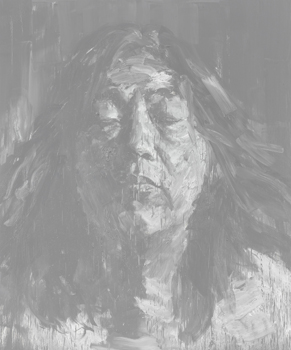 The artist, Yan Pei-Ming, invited to present his work in the Chapelle de l’Oratoire, has chosen to emphasise the museum’s remarkable collection of Baroque paintings.
Born in Shanghai in 1960, Yan Pei-Ming moved to Dijon in 1980, where he attended the School of Fine Arts. Famous for his Mao portraits, characterized by large formats painted in grisaille, the artist is known for a gestural painting, expressing passionately the features of its models.
During his residency at the Villa Médicis in 1993, he created a monumental piece of art, inspired by a Chinese tale, The 108 Outlaws, depicting the people around him in Rome and all of those who came by to visit him. In this way, he mixed up, with talent, the past and the present.
For his exhibition in Nantes, Ming will finally bring an old project to life. Indeed, even if he is not familiar with Christian culture because of his origins, he has been exposed to it frequently since his arrival in France. Thus, he was hoping to find a suitable place to carry out his large self-portraits which express an attitude of meditation. The Chapelle de l’Oratoire is exactly the sort of place that can accommodate such paintings. Confronting the museum’s Italian and Flemish masterpieces, Ming continues his analysis of occidental heritage, which he began at the Louvre where he took La Joconde as a subject, while conceiving and developing the landscape in which Leonardo da Vinci placed his model.
The Chapelle is open (from 15 June to 19 September) daily except Mondays from 10am to 7pm. After 19 August, daily except Tuesdays from 10am to 6pm.
Press contactsVéronique Triger: T 02 51 17 45 40 / veronique.triger@mairie-nantes.frAdeline Biguet: T 02 51 17 45 85 / mba.communication@mairie-nantes.fr
*Image above:
Yan Pei-Ming, Autoportrait.© Yan Pei-Ming, ADAGP, Paris, 2012. Photo: André Morin.