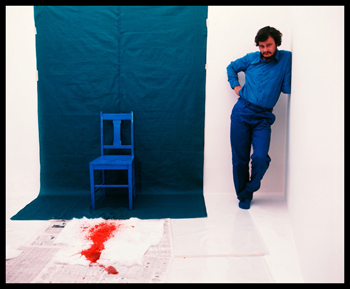 Share on google_plusone Share on emailShare
Mike Parr, who certainly ranks among today’s most extreme performance artists, has chosen an only seemingly innocent title for his major retrospective in Vienna. For him, Edelweiß not only refers to the alpine flower, which may symbolize a positive relationship to Austria as one’s home country, but also reveals itself as an ambiguous play on words: while the German name suggests “edler Weißer” (noble white man) and “reines Weiß” (pure white), the English Edelweiß evokes the phonetically similar “ideal/idle vice” or “idol/vise.” The artist’s critical examination focuses on the ideological heritage of Modernism. Parr voices a fundamental doubt about exclusive concepts of identity and models of thinking and regards art as a possibility of shifting the point of view.
Parr began his career as an artist in his native Australia in the early 1970s. In parallel to international art movements that proclaimed the body to be a medium and events works of art, he explored the limits of his physical capacity to the point of self-mutilation in his provocative appearances.
The exhibition in Vienna is the first comprehensive monographic show dedicated to Mike Parr in Europe. Besides a selection of his most important performances presented in the form of videos and photographs, the Kunsthalle Wien also shows drawings, graphic works, and scripts that enter into a fascinating dialogue with them.
Inspired by a conceptual understanding of what a work of art is and informed by a Marxist attitude toward it, Mike Parr presented first language-based works of his in the Inhibodress Gallery in Sydney around 1970. This off-space, which he ran together with Peter Kennedy from 1970 to 1972, for example, and where he exhibited, was to become the nucleus of an extreme variation of Body Art which—related to artistic positions like those of Vito Acconci, Chris Burden, and the Vienna Actionists—endowed the convergence of art and life in its local context with a dynamic dimension. Since then, Mike Parr has uncompromisingly questioned aesthetic norms and social circumstances: in 1977, he drew attention with his Armchop performance, shocking the public by unexpectedly hacking off his left arm, an artificial limb filled with minced meat and fake blood. The performance UnAustralian (2003) was a direct response to the situation of refugees in Australia: reenacting their protests, Mike Parr had his mouth sewn shut.
Traumatized by having been born with only one arm, Mike Parr takes his own identity as a starting point and unfolds a both confrontational and mystical artistic language of the radical that revolves around the psycho-social dimensions of the self and the community, subjectivity and memory, the issue of human existence and its control. Mike Parr relies on shock, pain, disgust, and taboo to activate the public and to stimulate it to discuss issues of art and ethics. He digs in the arsenals of the subconscious where feelings of moral unease arise and traumatic existential experiences become manifest, where irrational mechanisms of the collective psyche find their expression, and where the personal and the political merge.
In the 1980s, the artist partly turned his back on live performances and began to dedicate himself to drawings, printed works, and installations. The large number of objects brought together under the titleThe Self-Portrait Project is to be understood as a body of works that reflects the reflection on performance as such. His engagement with the self-portrait, which Mike Parr sees as a processual form of self-analysis, has brought forth perforated, broken images—expressive and yet about to dissolve.
Mike Parr, born in 1945, lives and works in Sydney.
Curator: Synne Genzmer
Catalog: The exhibition will be accompanied by a German and English catalog published by Verlag für moderne Kunst Nürnberg; with texts by Synne Genzmer, Gregory Wilding, Anne Marsh, and Gerald A. Matt. Edited by Kunsthalle Wien, Synne Genzmer, c. 220 pages, c. 250 color and black-and-white illustrations.
Information and photographic material: Katharina Murschetz, Kunsthalle Wien: Museumsplatz 1, 1070 Vienna, Austria / T +43 1 521 89 1221 / presse@kunsthallewien.at
*Image above:
Mike Parr, The Emetics (Primary Vomit): I am Sick of Art (Red, Yellow and Blue) Red, 1977. © Mike Parr, Courtesy the artist & Anna Schwartz Gallery.