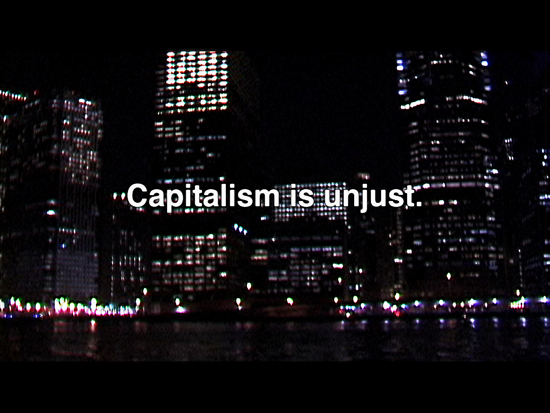 For nearly three decades, video artist Tony Cokes has been engaged in a thorough examination of the uses of sound and image by forms of popular culture and mass entertainment. Working independently since the mid-1980s, and as part of the “art band” X-PRZ from 1991 to 1999, Cokes’ videotapes, sound and multi-media installations cull together a broad range of theoretical texts, popular music and archival images that are endlessly borrowed, recycled and sampled to look at the ways in which ideology and power are distributed and subsequently perceived and received. Cokes levels out the field of “appropriation” to include the products of intellectual culture and theoretical discourse, giving visual shape to a history of critical response and further implicating the “culture of critique” in the endgame of capitalism.
Retro (Pop, Terror, Critique), Cokes’ first solo exhibition in Los Angeles, brings together over 30 videos and text animations from the past 15 years. Taking the form of a new multichannel installation conceived for REDCAT by the artist, the exhibition offers a survey of Cokes’ recent output, while subjecting his own artistic practice to the looping processes of use and reuse. The repurposing of existing works to this end furthers the repetition of images, sounds and texts that has been characteristic of the artist’s work since his acclaimed Black Celebration (1988), which pairs newsreel footage of uprisings in urban black neighborhoods in the 1960s with textual commentary and popular music references from the 1980s.
“Pop Manifestos” (1998–present), “The Evil Series” (2001–present) and “Art Critique Series” (2008–present) are brought together for the first time in a series of eight programs that rotate each week of the installation’s eight-week run at REDCAT. Cokes’ extensive project maps a set of ongoing and concurrent interests that treat the discourses of cultural studies, media theory and art criticism as readymade systems of reference. Having described how perceptions of race, gender and class are perpetuated in the entertainment industry by what he calls the “representational regimes of image and sound,” Cokes’ videos indiscriminately redeploy texts from recent critical theory––whether borrowed from his own writing or from others––to reveal the complicity of critique as yet another form in the process of media representation.
Tony Cokes (b. 1956, Richmond, VA) currently lives and works in Providence, Rhode Island where he is Professor in Media Production in the Department of Modern Culture and Media at Brown University. His video, sound and multi-media installations have appeared in exhibitions and screenings at The Museum of Modern Art and The New Museum of Contemporary Art, New York; The Institute of Contemporary Art, Boston; MuHKA, Antwerp, Belgium; MACBA, Barcelona; and the Centre Georges Pompidou and La Cinémathèque Française, Paris. He has been included in such notable exhibitions as the 1st Berlin Documentary Forum at the House of World Cultures in Berlin (2010); the Whitney Biennial at the Whitney Museum of American Art in New York (2002, 1991); and Documenta X in Kassel, Germany (1997). His work also has received regular support from media-art festivals including Freewaves in Los Angeles; the Rotterdam International Film Festival in Rotterdam, The Netherlands; Rencontres Internationales Paris/Berlin/Madrid; the Oberhausen Short Film Festival in Oberhausen, Germany; and the Impakt Festival in Utrecht, The Netherlands. In 2008–09, Cokes was a Resident Scholar/Artist-in-Residence at the Getty Research Institute, Los Angeles.
Tony Cokes: Retro (Pop, Terror, Critique) is funded in part with generous support from Joy Simmons and The Faculty Development Fund, Brown University.
Gallery at REDCAT aims to support, present, commission and nurture new creative insights through dynamic projects and challenging ideas. The Gallery presents five exhibitions every year, often of newly commissioned work that represents the artist’s first major presentation in the U.S. or Los Angeles. The Gallery also maintains an active publishing program producing as many as two major monographs per year. Proceeding from the geographic and cultural specificities of Los Angeles, its program emphasizes artistic production of the Pacific Rim—namely Mexico, Central and South America and Asia—as regions that are of vital significance to California. The Gallery aims to facilitate dialogue between local and international artists contributing to a greater understanding of the social, political and cultural contexts that inform contemporary artistic practice.
Gallery at REDCAT is open Tuesdays through Sundays from noon to 6pm or until intermission. It is closed Mondays and major holidays. Admission to the Gallery at REDCAT is always free.
REDCAT is located at the corner of W. 2nd and Hope Streets, inside the Walt Disney Concert Hall complex in downtown Los Angeles (631 West 2nd Street, Los Angeles, CA 90012).